An Evening with Midori

“A Evening With Midori” Postponed

March 14, 2020 (Charleston, SC) – After much consideration, and in following our commitment to the health and safety of our concert goers, volunteers and musicians, Chamber Music Charleston has made the difficult decision to postpone the March 24th “Evening with Midori”.

The decision comes after reviewing the latest guidance from the Centers for Disease Control and Prevention (CDC) and in consultation with the staff of Partners in Performance, which represents Midori

CMC will notify existing ticket holders immediately of the new performance date and existing tickets and seating will be transferred to the new date.  Ticket holders are encouraged to contact sandra@chambermusiccharleston.org with questions and to learn about other options regarding their tickets.

Midori is a visionary artist, activist and educator whose unique career has transcended traditional boundaries. A prominent concert violinist for over 30 years, she is also a noted global cultural ambassador and dedicated music educator.

An advocate for music and composers of her time, Midori inspired Peter Eötvös to compose the violin concerto DoReMi, which she then recorded with the Orchestre Philharmonique de Radio France conducted by the composer. Other commissions and world premieres have included works by Einojuhani Rautavaara, Brett Dean and Johannes Staud. An upcoming New Music project will present compositions by some current female composers and she has commissioned a concerto from Detlev Glanert for the 2020 Beethoven anniversary.

Midori’s discography includes sonatas by Bloch, Janáček and Shostakovich performed with pianist Özgür Aydin and a 2013 Grammy Award-winning recording of Hindemith’s violin concerto with Christoph Eschenbach conducting the NDR Symphony Orchestra. The two-CD set of her highly-acclaimed interpretation of J.S. Bach’s Sonatas and Partitas for Solo Violin was released in 2015. Earlier recordings on the Sony Classical label feature works by Mozart, Dvořák, Bartók, Poulenc and Sibelius, among others.

For more than 25 years, Midori has led two non-profit organizations: Midori & Friends, which provides high-quality music education to New York City youth; and Japan-based MUSIC SHARING, which brings western classical and traditional Japanese music into schools, institutions and hospitals through innovative events, activities, instruction and presentations in Japan and other Asian nations. Other educational and social engagement efforts are Partners in Performance, founded in 2003, which promotes classical music outside of major urban centers across the United States and the Orchestra Residencies Program, begun in 2004, which encourages young musicians in the U.S. and beyond to develop a life-long and multifaceted engagement with the performing arts.

Midori has been honored for her international activism: in 2007, UN Secretary-General Ban Ki-moon named her a Messenger of Peace, and in 2012 she received the Crystal Award from the World Economic Forum in Davos.

Midori is a member of the violin faculty at the Curtis Institute of Music. Previously she held the Jascha Heifetz Chair at the University of Southern California’s Thornton School of Music. She is also a distinguished visiting artist at the Peabody Institute of Johns Hopkins University, an honorary professor at Beijing’s Central Conservatory of Music and a guest professor at both Soai University in Osaka and the Shanghai Conservatory of Music. During the summers, she teaches regularly at Ravinia’s Steans Music Institute and the Weimar Meisterkurse.

Born in Osaka, Japan in 1971, Midori began her violin studies with her mother, Setsu Goto and made her debut in 1982 with the New York Philharmonic under Zubin Mehta, which was met by a standing ovation that spurred her to pursue a musical career at the highest level.

Midori plays the 1734 Guarnerius del Gesù ‘ex-Huberman’. She uses four bows – two by Dominique Peccatte, one by François Peccatte and one by Paul Siefried. 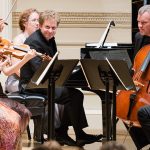 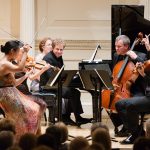